My girlfriend in Melbourne and my father in law have both started earthing at night.  Both of them told me after a day or two that they were burning hot at night.  My father in law even pulled out the plug thinking it would cool him down (like an electric blanket).

However, I feel the answer lies with the blood which has become thinner.  As we age, our blood cells become sticky and clump together rather than circulating separately.  Contact with the Earth appears to create warmth in the extremities and body as a result of better circulation and relaxation.   There is a study where blood was taken from several people by a Cardiologist who was studying the effects of earthing on the heart.  After only 40 minutes of earthing, the "ketchup" sticky blood in almost all subjects was changed to almost a "red wine" consistency.  Photos were taken of the results which I now show. 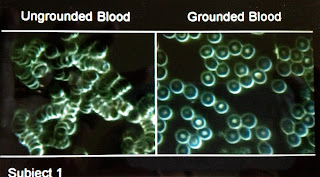 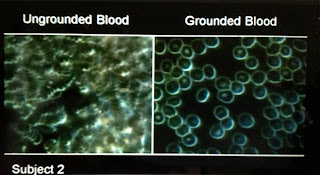 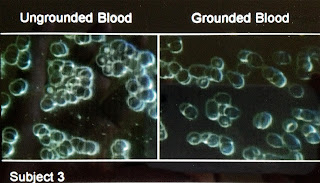 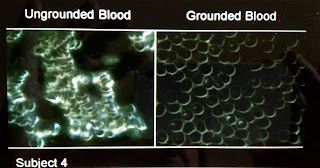 Kathie Horn
Brisbane, Queensland, Australia
Turning 50, for me was a bit of a shock! It was as if all the signs of aging decended on me all at once. I started to feel aches and pains in all sorts of places, menopause set in and my muscles felt stiff and sore most of the time. I couldn't sleep, had dry eyes and mouth, creaking knees, back pain, and the list could go on. I know, I sound like a bit of a whinger, but I tell you this to not glorify the signs of aging, but to share how I started on my journey to reverse these signs. I am going to share with you my own story to natural health, which of course is ongoing, as I learn more every year! There is an old saying: "When the student is ready, the Teacher appears". Is this ever true! As I started to look for answers, I was overwhelmed with information I never new existed. I am not a doctor or qualified to offer health advice of any kind, but I will point you to the links of those who are qualified. My only hope is that I will jolt your interest in different methods of healing the body and that you will study it out for yourself.